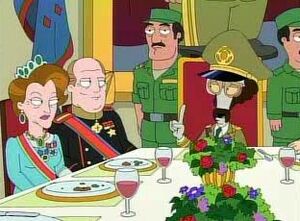 King Harald V and Queen Sonja are the reigning monarchs of Norway. King Harald succeeded to the throne of Norway upon the death of his father Olav V on 17 January 1991. The son of the then-Crown Prince Olav and of Princess Märtha of Sweden, Harald was born at the Crown Prince Residence at Skaugum, Asker.

They are seen at a dinner party hosted by Roger posing as General Juanito Pequeño in "Moon Over Isla Island".

Retrieved from "https://americandad.fandom.com/wiki/King_Harald_V_and_Queen_Sonja?oldid=68911"
Community content is available under CC-BY-SA unless otherwise noted.