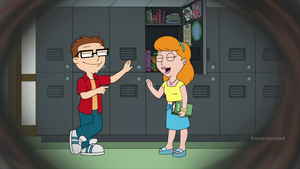 Kim is a student at Pearl Bailey High School. When Steve finds out that Frankle uses the fact that his little brother had his arm torn off in a wood chipper to score sympathy dates with girls in "Stan Knows Best", Steve uses this ploy to get a date with Kim by passing Roger off as Hayley, burned in an accident. Kim shows up early for their trip to the school dance to fool around with Steve, but first wants to help spread some lotion on "Hayley". When Kim spends too much time with Roger, Steve gets frustrated and starts an argument, calling Roger "ugly" and causing Kim to leave.

Kim also has a cameo in "A.T. The Abusive Terrestrial" during the "When I Was His Alien" musical montage and at school the morning after Etan Cohen's Bar mitzvah in "Bar Mitzvah Hustle".

She also appears at the carnival in "Why Can't We Be Friends?".

Steve tries to get a date with Kim in "Vision: Impossible" and asks Roger if he has a chance. Roger, who is having visions of the future, sees Steve throwing up on Kim, but sends him along anyways as a prank.

Kim appears in the school cafeteria when Figgus is forced to break up with Jenna in "Introducing the Naughty Stewardesses" and at the party Steve and his friends throw for the uncool kids in "The Unincludeds".

She can be seen at the basketball finals in "Criss-Cross Applesauce: The Ballad Of Billy Jesusworth" and outside of the school in "Garfield and Friends".

She also appears in the talent show audience in "The Talented Mr. Dingleberry" and at the Pearl Bailey High School French Club fashion show in "Mean Francine".

She can be seen in the audience at Steve's play in "Tapped Out".

Kim is voiced by Zooey Deschanel.

Retrieved from "https://americandad.fandom.com/wiki/Kim?oldid=89254"
Community content is available under CC-BY-SA unless otherwise noted.