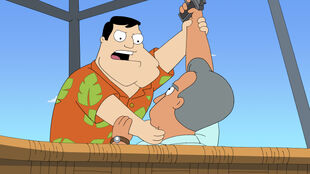 Killer Vacation
The Smith family's tropical vacation turns out to be anything but relaxing. 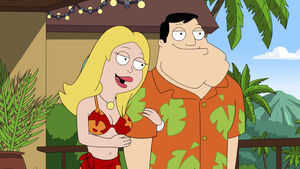 The Smith family goes on a tropical vacation with Francine making it perfectly clear to Steve that she and Stan are not to be disturbed as she wants Stan to unwind from work while Hayley and Jeff hope to rekindle their sex life. In addition, Roger decides to pose as an elderly widow leaving Steve to his own devices. When Bullock calls for a bit of work, Francine threatens to make Stan attend a televised marriage counselor.

When they pose for a picture to send to the office, Bullock recognizes a known war criminal named Goran the Mutilator posing as the activities director and orders Stan to take him out, leaving Stan to try to do so without Francine catching on. Stan's attempts fail and Francine intercepts one of Bullock's texts. But when she confronts Stan, she surprises him by demanding they participate together so they can get back to their vacation. As they try to get the assassination over with, Stan runs into a suicidal ring-tailed lemur and Francine decides to act on her own, attempting to beat Goran to death with a tennis racquet. Stan drops his gun during his struggles with the lemur and Goran picks it up but the lemur gets in the way as he attempts to shoot Francine and she and Stan make a run for it. They flee to a hot air balloon but Gorna follows and shoots Francine. Stan and Goran wrestle but Francine turns out to have been protected by a piece of bling she made in crafts and Stan gets Goran at gunpoint, only to have him harpooned by an annoying groundskeeper from the resort. 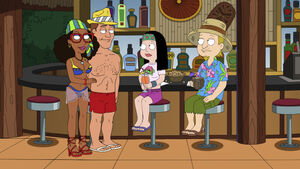 Hayley and Jeff find the spark has gone out of their lovemaking and not even the tropical setting seems to help. As they commiserate, they receive an offer by another couple to consider swapping but consider the offer ludicrous, but decide to give it a try when they continue striking out on their own. They both get a surprise when the couple lead them to break off into same-sex couples.

On his own, Steve finds the resort camp is geared towards toddlers but is talked into trekking across the island to find a nude beach by another boy with a charming accent. The boy constantly leads them into pitfalls but despite his better judgment, Steve can't help but follow due to the other boy's accent. 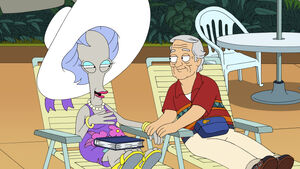 Meanwhile, Roger meets an elderly charmer named Larry but finds he's more than willing to trade up when he gets a chance to be with a younger woman and dumps Roger. Roger decides to get even by exposing Larry's colostomy bag contents to his new girlfriend.

Stan and Francine arrive at the nude beach and decide to get out of their bloodstained clothes. Steve arrives with his companion and is immediately turned off by the sight of his parents naked but pauses for a moment when he spots Hayley and Jeff making out on the beach. Jeff and Hayley find their near encounter with craziness has brought back the spark in their relationship although Jeff hints that he actually went through with having sex with his male partner. Roger ends the day by dumping the ashes of "her" husband Omar in the surf only to scream at him for what he did to their kids, then cackles about not being able to leave things nice.