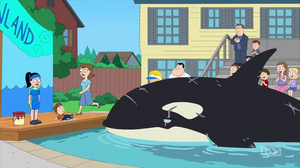 Killaton is a killer whale that Roger acquires from a Canadian marine park after killing a few people in "The Nova Centauris-Burgh Board Of Tourism Presents: American Dad".

Seeking to boost attendance at the marine park that they've opened up at their home, Stan permits Roger to buy a whale, which he finds for cheap while searching for one with a checkered past. Hayley is reluctantly assigned training duties, despite Roger's assurances as Killaton spits up an arm with a watch still attached.

During a performance, a child falls into a chum bucket and is intentionally pushed into the water by Roger. However, Killaton actually saves the child to the delight of the audience. As he splashes water into the crowd, the stands collapse, sending the audience out in ambulances. Roger reveals that in order to feed the whale, he cut corners on the construction of the stands.

Retrieved from "https://americandad.fandom.com/wiki/Killaton?oldid=67930"
Community content is available under CC-BY-SA unless otherwise noted.