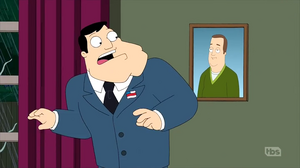 Kevin George Knipfing (born April 26, 1965), better known by his stage name, Kevin James, is an American actor, comedian, screenwriter, and producer, formerly starring in The King of Queens. He is also known for his work in the films Paul Blart: Mall Cop & Paul Blart: Mall Cop 2 and Pixels.

While searching the house for a possible killer in "Death by Dinner Party" with Brian Lewis, Stan anciently bumps into a prized Kevin James head shot hanging on the wall of his study and punches it, smashing it in the process. Unperturbed, Stan digs another one of multiple copies out of his desk and hangs it on the wall.

Retrieved from "https://americandad.fandom.com/wiki/Kevin_James?oldid=77677"
Community content is available under CC-BY-SA unless otherwise noted.