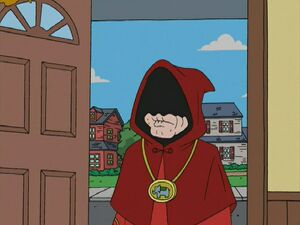 Karl Rove (born December 25, 1950) was George W. Bush's senior adviser and chief political strategist who appears in "Deacon Stan, Jesus Man" to help Stan in his goal to become a church deacon. Whenever his name is spoken, a lone wolf can be heard howling and he lowers the temperature of the room he is in, as Francine comments on the immediate temperature change when he walks in the room, even freezing Klaus' bowl. When he attempts to step in the church his body begins to burn, as smoke steams from his skin. He departs the episode by transforming into a cloud of bats, which fly off. He wears an amulet round his neck featuring an elephant. At one point, he opens his red cloak to the Smiths and a demonic sound can be heard as the Smiths scream in horror.