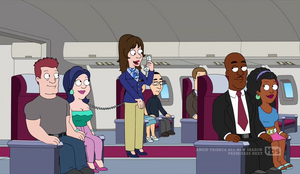 When Roger takes a flight attendant job in order to score laughs, his jokes get some laughs. But when he completely forgets to perform the safety announcement for the jokes, he is upstaged by Karen. He tries to involve Jeff, Hayley and Steve to support his jokes, but continues to strike out and suffers being the butt of more humor from Karen.

Roger finally has enough of being upstaged and announces that he has sabotaged the plane. Yanking open the aircraft door, he gives Karen one last word that he "kills," but as he leaps from the aircraft, he finds they are on final landing approach and his parachute gets tangled in the landing gear. As the plane stops at the gate, he looks up and celebrates having gotten a laugh out of the passengers as they look down on his battered body.

Retrieved from "https://americandad.fandom.com/wiki/Karen?oldid=71934"
Community content is available under CC-BY-SA unless otherwise noted.