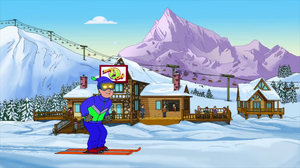 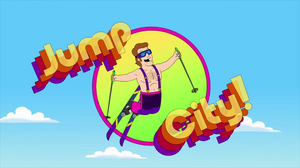 Jump City! is the closest ski area to Langley Falls.

When Klaus steals Stan's human body in "Da Flippity Flop", he intends to break the world ski jump record performing a deadly jump of the same name. Stan has to use Klaus' decaying human body and pursues him to Jump City!. Following him on the lift, he begs Klaus not to jump and kill his normal body. Stan pursues Klaus down the hill, forcing him into a tree and breaking his leg. As Stan is forced onto the jump, Klaus coaches him into allowing his body to take over, but after a few seconds of flight, he crashes and breaks apart. Francine and Hayley knock Klaus out and have the CIA return them to their correct bodies.

Retrieved from "https://americandad.fandom.com/wiki/Jump_City!?oldid=41462"
Community content is available under CC-BY-SA unless otherwise noted.