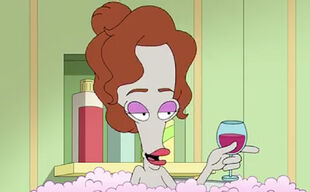 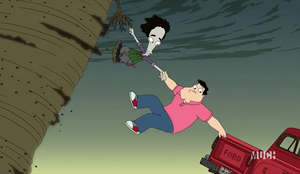 When Stan gets into hot water with Francine for dumping her jam to store crickets, he tries to drown his sorrows at Roger's Place. When they wipe out the remaining dregs of Roger's booze, Stan pulls a bottle of wife from the closet that Francine was saving and drinks it before passing out. When he awakens and realizes what he has done, he agrees to Roger's plan to recreate the wine under the exact same conditions it was grown originally. But when those plans also include a tornado, Stan begins to wonder if it was worth it. When Roger assures him that he would have gone to the same lengths for him in return, Stan hesitates. Roger is hurt by the moment of betrayal and flies off through the top of the tornado. 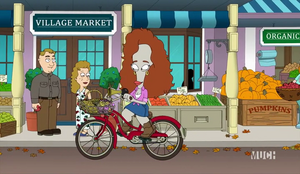 With a new life in a new town, Roger falls for Jessie, the local hunk, but later finds he is also being stalked by Stan. Roger refuses to have anything to do with him and when he tries to turn to Jessie and the town for aid, finds he is to be the victim of a virgin sacrifice. Stan manages to save him and they take refuge in Roger's dried flower shop. Roger produces a bottle of wine made from the vine they had planted as Stan reveals that he simply stuck a label on a bottle of Diet Rite cola, completely fooling Francine. As they try to drink Roger's concoction, he reveals that he had to bulk it out with gasoline and nitroglycerine. They flee the crowd, breaking into the shop through an underground tunnel to a fudge shop across the street, where they trigger an explosion, wiping out the villagers. 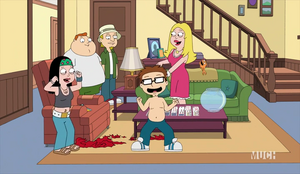 When Steve finds out that Jeff and Barry have never met, he arranges a meeting between the two after a great deal of thought. As they meet for an extended time in private, Steve stresses out and nearly comes to blows with Klaus. As they almost start fighting, Barry and Jeff return to the living room and announce that they've agreed to do a 'project' together. As everyone celebrates, the story is to be continued.

Retrieved from "https://americandad.fandom.com/wiki/Julia_Rogerts?oldid=83478"
Community content is available under CC-BY-SA unless otherwise noted.