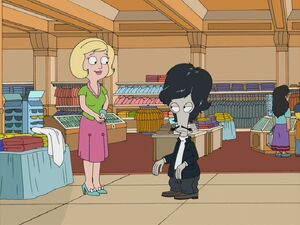 Judy Panawitz is a none-too-bright girl who works as a department store clerk at C. J. Neppey in "The One That Got Away". When Roger tries to trick out Judy of a pair of gloves, he sees the manager Mr. Billdocker berating Judy for being late. When Judy blames it on her boyfriend Rico for burying her alive. Mr. Billdocker says that's what she deserves for letting jerks treat her like garbage, then kisses and spits on her. When Roger hears her wishing for a great guy, he becomes Sidney Huffman, the man of Judy's dreams. When Roger's plan succeeds to steal the gloves, Mr. Billdocker fires Judy, causing Roger to care about someone other than himself and causes him to develop a split personality, with Sidney Huffman taking on a life of his own. He returns the gloves to Judy and Mr. Billdocker and compliments her and tells them he'll buy them. When Roger's persona of Sidney buys a diamond engagement ring for Judy, Roger vows revenge on Sidney. Sidney soon finds Roger destroying his life, first sabotaging his job, wrecking his garden and killing his pigeons. Roger meets with Judy and tells her Sidney is riddled with venereal diseases. Sidney tries to make things better by proposing to Judy at Luciano's but she completely dumps him. When Sidney realizes he will never be free of Roger's wrath, he hires a hitman to take him out. When Roger realizes Sidney is himself and tries to call off the assassination, the hitman requires the password just in case Sidney wanted to call it off so Roger goes to Judy to ask about his favorite words. Unfortunately, the hitman comes in with his daughters and spots Roger. He hides in a change room, overhearing that the hitman is threatening to kill Judy. Roger confronts his runaway persona but stabs him in the back when they come to peace with each other. Roger dumps Judy, but seeing her cry, he decides to stick with her. Roger than tells Judy that he's a drunk and that he has no genitals, and then she tells him that "she" has both sexual reproductive organs.

Judy has an audience cameo in "Phantom of the Telethon".

Judy is voiced by Paige King.

Retrieved from "https://americandad.fandom.com/wiki/Judy_Panawitz?oldid=58170"
Community content is available under CC-BY-SA unless otherwise noted.