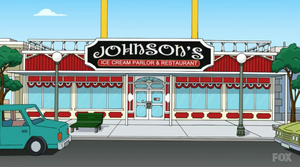 Johnson's Ice Cream Parlor & Restaurant is a restaurant that Stan's mother took him to when his father left them.

In "Stan's Food Restaurant", after complaining throughout a meal out with Francine, Stan tells of finding happiness at a restaurant called Johnson's after his father left. He had created what he considered to be wonderful food although it left him with his third worst diarrhea as a child. Unfortunately, the place blew up after his day there, leaving him unsatisfied ever since.

Retrieved from "https://americandad.fandom.com/wiki/Johnson%27s?oldid=49999"
Community content is available under CC-BY-SA unless otherwise noted.