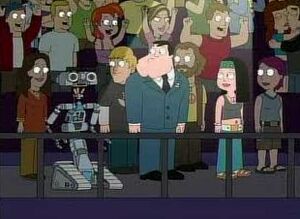 Johnny 5 aka "Number 5" appears in "My Morning Straitjacket" at the My Morning Jacket concert. He is also one of the robots trying to pass as kids in "The Witches of Langley".

Retrieved from "https://americandad.fandom.com/wiki/Johnny_5?oldid=72062"
Community content is available under CC-BY-SA unless otherwise noted.