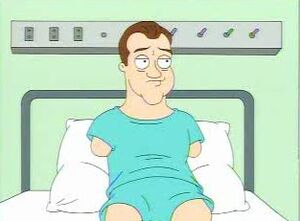 John Q. Mind appears as a hospital patient in the episode "In Country...Club", where he mentally manipulates the curtains around his bed and slams a doctor into a wall. According to a mysterious stranger at the end of the episode, John Q. Mind was America's greatest soldier until his arms & legs were blown into his mind. The stranger then vows to catch John, we then see John driving a motorcycle towards the Pentagon. His adventures are presented as a 70's style fictitious television adventure/drama titled Mind Quad!.

John returns in "School Lies" when he encounters Jimmy Boombox fleeing from the police after being framed by Stan for crimes committed by Steve. Sensing a kindred spirit in Jimmy, John uses his mind powers to lift the disabled Jimmy from his wheelchair into a motorcycle sidecar and they take off together.

Roger awakes in the hospital following an accident in "Vision: Impossible" to find he can no longer see visions of the future. As he remarks on his lack of powers, John Q. Mind demonstrates his for him, fetching him a drink and summoning a motorcycle on which he leaves the hospital. Roger refuses to drink from the glass, as John's lack of limbs disgusted him.