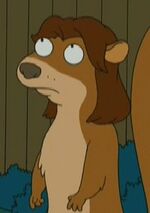 John Burke Krasinski is an American actor, film director and writer. He has acted in several films, including Shrek the Third, Leatherheads, License to Wed, It's Complicated and Away We Go, but is most widely known for playing Jim Halpert on the NBC sitcom The Office.

John provides the voice of Gilbert in "Irregarding Steve".

Retrieved from "https://americandad.fandom.com/wiki/John_Krasinski?oldid=35108"
Community content is available under CC-BY-SA unless otherwise noted.