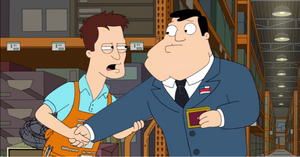 John is an employee at Home Depot where Stan tries to buy components for his home security system for Francine in "Funnyish Games".

After John points out that they don't carry military-grade hardware after Stan's request, he modifies it to lesser weapons, such as blow darts and bear traps and is told they are located in plumbing. He's not quite convinced at first that he's not being put on by John, but after he offers to take him there, he tries to shake his hand. When he does, John pulls him close and whispers that he made him look like a clown.

Later, Francine admits that while she likes Stan looking out for her, she can also look out for him in return. She does so by returning to Home Depot and beating up John while Stan peeks from a few aisles away.

Retrieved from "https://americandad.fandom.com/wiki/John?oldid=82020"
Community content is available under CC-BY-SA unless otherwise noted.