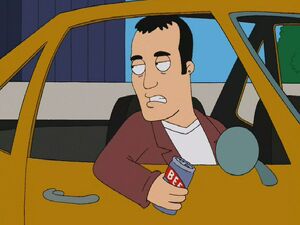 Joe Rogan is an American comedian, actor and color commentator for the Ultimate Fighting Championship.

Rogan is also known for his role as Joe Garrelli in NewsRadio and as host on the TV game/reality program Fear Factor. He co-hosted the final season of The Man Show. Rogan was also the host of CBS's Game Show in My Head.

In order to toughen up Jeff Fischer in "Bullocks To Stan", Stan proposes Jeff spend the day with Joe, which causes Jeff to finally become assertive in refusing.

Retrieved from "https://americandad.fandom.com/wiki/Joe_Rogan?oldid=89634"
Community content is available under CC-BY-SA unless otherwise noted.