For the writer, see: Joe Chandler 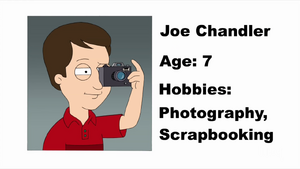 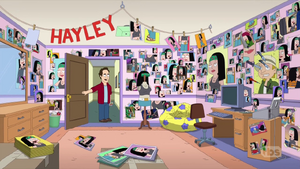 When Hayley mentally regresses to age six in "Hayley Smith, Seal Team Six", Jeff and Klaus discover that an event at her seventh birthday party transformed her from being "Happy Hayley" to a grump. They notice a boy taking a picture in the background of one of Hayley's photo albums at the moment she changed and believe he captures the event from her perspective. They find his name in a school yearbook and track him down, where he offers to check his collection, leaving them unaware that he has been obsessing over Hayley for years, and having collected thousands of photographs. Also in his collection is a poster of Jeff that had been run though with various knives and darts. Joe gives them the picture they request, noting that the trigger event was a news story of baby seals being clubbed to death, unaware as they leave that Joe has a rifle trained on Jeff's back, although he laments that he doesn't have any bullets in it.

After Hayley is later returned to normal, she and Jeff are also unaware that Joe is lurking in the tree outside of their bedroom taking an instant photograph as he complains about the time it takes to self develop.

Retrieved from "https://americandad.fandom.com/wiki/Joe_Chandler_(Hayley_Smith,_Seal_Team_Six)?oldid=66272"
Community content is available under CC-BY-SA unless otherwise noted.