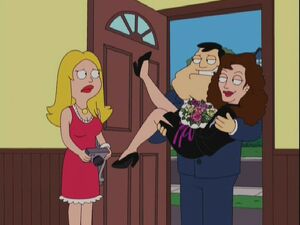 Joanna is the woman Stan meets at the Fun 'N Gun Shooting Range when divorced by Francine so he can sleep with another woman to prove that sex without love is meaningless in "When a Stan Loves a Woman".

When Stan gets into a competition with Joanna over who is better with firearms; the event culminates with them shooting each other, then going out to dinner at Cap'n Monty's where they reveal they were both wearing bullet-proof vests. When they go on a picnic the next day, they end up getting married.

While on their honeymoon at the Grand Hotel, Francine rushes to stop them when she regrets her actions but is unable to locate them. While pondering her fate in the hotel bar, Stan shows up and reveals he found he didn't really love Joanna after all but did have sex with her five times to prove it. Steve end up going to live with Joanna, who got primary custody of Steve as well as most of the Smith's possessions in the divorce proceedings with Stan.

Joanna also has a cameo at Stan and Francine's vow renewal in "Shallow Vows" and is one of the savage survivors in "The Two Hundred".