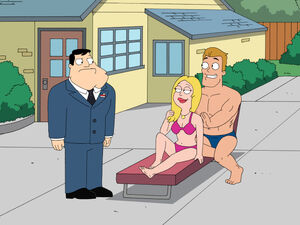 Jim is one of Stan's co-workers at the CIA. In "Wife Insurance", they are sent on a mission to Colombia and are captured. To escape, Jim literally charms the pants off the female guards. When Francine finds out that Stan plans to marry Meg Penner in the event of her death she uses Jim to make Stan jealous. Jim falls in love with her and tries to kill Stan. While they are fighting, Jim is shot by Meg Penner. He later appeared alive and well in "G-String Circus".

Jim is voiced by Patrick Wilson.