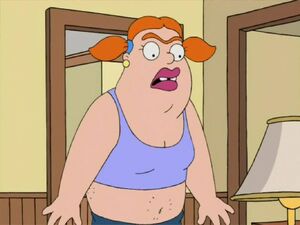 Jewel is a very ugly girl that Roger is forced to go out with in "Francine's Flashback". Jewel is Lindsay Coolidge's friend. Lindsay told Steve that if Steve got her friend Jewel a date, she would go out with Steve, so Steve got Roger to go out with Jewel. All goes well, as Steve is successful in getting Lindsay to go back to his house, but all the while Jewel is getting quite hands-on with Roger. While trying to escape Jewel's advances, Roger's costume comes off, and she sees him as the alien he is. When Jewel runs to tell her friend the truth, Roger is forced to clobber her in the head with a frying pan. Lindsay sees what happens, and tries to run, but Roger hits her on the head by throwing the pan at her. As Roger and Steve stand over the two unconscious girls, Roger suggests that they should pin the assault on "black guys".

Stan and Francine come home only to find Roger and Steve with two girls tied up and gagged. The solution is obvious: take them to the CIA secret lab and have the last 24 hours erased from their memories. While this is done, Stan is relieved to find out that Steve was hanging out with the cute girl.

Jewel also appeared in "Daddy Queerest" where she was making out with Steve when he was drunk.

Jewel shoots down Steve and Snot's request for a prom date on her way into the boy's restroom in "Steve and Snot's Test-Tubular Adventure" and at the school dance in "Introducing the Naughty Stewardesses".

She is one of the savage survivors in "The Two Hundred" and nearly beats up Steve in "Criss-Cross Applesauce: The Ballad Of Billy Jesusworth" when he gets trapped in the girls locker room. In this episode, her age is given as 14.

She can be seen at the fight club in "Shark?!" and appears during "Everyone is Happy in Utopia" in "300".

Jewel was originally voiced by Marissa Jaret Winokur. In "Steve and Snot's Test-Tubular Adventure", she is voiced by John Cho.

Retrieved from "https://americandad.fandom.com/wiki/Jewel?oldid=91222"
Community content is available under CC-BY-SA unless otherwise noted.