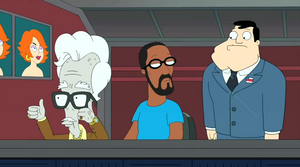 Jeremy is the sound engineer Roger hires in "Max Jets" when his elderly rich persona of Max Jets builds a sound studio in the Smith basement for a gold-digging waitress named Gina who wants to start a career in music. After Gina records "My Love Is Pure", Max asks Jeremy if he thinks it will be a hit and Jeremy give him an enthusiastic nod signaling yes. But when Max turns to give Gina a thumbs up, Jeremy turns to Stan and shakes his head "no."

Previously, Jeremy could be seen at the Langley 4th of July Festival in "American Dream Factory" as Steve and the Mexicans start to sing "Take Me Home, Country Roads" and as one of the Vietnam reenactors in "In Country...Club".

He also is hit in the groin by Stan as a waiter in "Stanny-Boy and Frantastic" and appears at the Hollywood party in "Twinanigans".

Jeremy works at the restaurant in the opening of "One Fish, Two Fish".

Retrieved from "https://americandad.fandom.com/wiki/Jeremy_(Max_Jets)?oldid=87915"
Community content is available under CC-BY-SA unless otherwise noted.