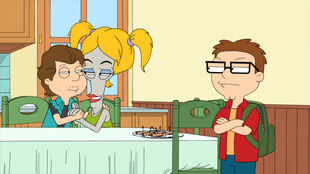 Jenny Fromdabloc
After Snot gets shot down by Hayley, Steve and Roger devise a plan to cheer him up. 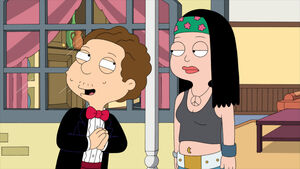 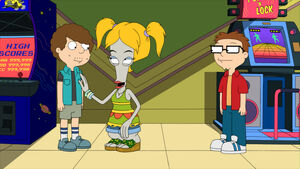 Ten years ago, Snot attains a crush on Hayley, which persists to the present day. In the present, while Steve is proposing an idea to his friends of tasting 31 ice cream flavors at Baskin Robbins, Snot professes his love for Hayley, despite her marriage to Jeff Fischer. Hayley rejects Snot, leaving him depressed, so Steve and Roger devise a plan to cheer him up. Roger dresses up as Steve’s teenage cousin from New Jersey, Jenny Fromdabloc, and Snot falls in love with her at a video arcade, where Steve, Toshi, and Barry all leave the two alone to connect. The next day at Pearl Bailey High School, Snot announces to Steve and his friends he and his date went to the beach and had sex there, much to Steve's horror.

Back home, Steve becomes outraged at Roger and start fighting, until he finds Roger washing a stress ball he used for another persona. When Steve questions him on why he is cleaning it, Roger reveals he is using it in order to have sex with Snot. At Wild West Land, an amusement park where Snot led the guys away from Steve and his 31 Flavors trip, Steve spills the news to Snot, showing the stress ball as proof. Devastated, Snot ends his relationship with Roger, which upsets Roger as well. Steve brings back up his original 31 flavors idea, but Snot still remains depressed from his broken relationship. Steve devises another idea to get him and Roger back together. In his Jenny disguise, Roger meets Snot again and apologizes for his past actions, and Snot accepts him back into their relationship again, at least until Roger becomes hit and killed by a bus, much to Snot's depression once again until Steve tells Snot he has gotten closer to having sex with someone than anyone in the group has ever been. Roger shows up again at the scene in another disguise and tells Steve that he faked his death, explaining his ability to move very fast as he sets up a decoy of his Jenny persona right before the bus hits it.

Meanwhile, Stan wants to start drinking martinis, but Francine says he cannot handle alcoholic beverages. Though as soon as Stan drinks a martini, he runs out on his neighborhood street at night in only his underwear. He drinks another martini again, this time causing him to pass out repeatedly. Unaware of his passing out for hours at a time, from how "quickly" Francine is able to move between "blinking" he comes under the assumption that she is a witch.