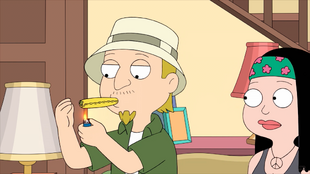 Jeff and the Dank Ass Weed Factory
A parody of Charlie and the Chocolate Factory. 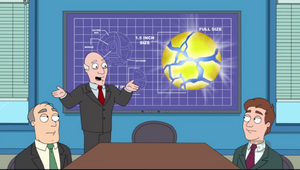 Egged on by Klaus, Stan rants against potheads, particularly Jeff. At the local pot shop, the stoners learn of a contest sponsored by Tommie Tokes with a prize of touring his weed factory. However, the CIA uses the contest for a massive drug bust and dreams of acquiring the "Everlasting Edible," a drug so powerful enough to give on an everlasting high. As the tickets are slowly taken, Jeff despairs of ever finding a winner, but he gets the very last one and asks Stan to accompany him on the tour.

As the tour progresses, the participants meet their fates. Suspecting Stan to be a narc because he refused to participate in his edible room, Tommie blends him a special joint. Ditching the tour for a time, Jeff and Stan slip into a room where they discover the Everlasting Edible, but claiming a new appreciation for marijuana, Stan refuses to take it. However, when they are the only ones left at the end of the tour, Stan is discovered with the edible, having faked being high thanks to the CIA technicians. 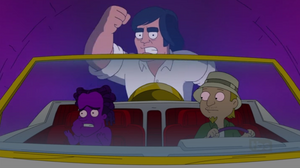 As punishment, Stan is nearly turned into one of Tommie's 'Snoopa Loompas', but manages to interrupt the process halfway through and is rescued by Jeff. In their attempt to flee, Jeff is forced to kill all of the Snoopa Loompas and gets Tommie to allow them to leave through a glass elevator. As they ascend into the sky, Stan admits he doesn't think of Jeff as the loser that he did before, but becomes very concerned as the elevator starts to crash back down to Earth.

Retrieved from "https://americandad.fandom.com/wiki/Jeff_and_the_Dank_Ass_Weed_Factory?oldid=85572"
Community content is available under CC-BY-SA unless otherwise noted.