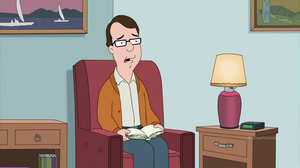 Jeff Watley nearly becomes the victim of Roger's revenge in "Cock of the Sleepwalk".

When Roger convinces Stan that he needs to kill a bad guy in order to stop his good self from taking over when Stan sleeps, he directs him to Jeff. As they cross town, Roger spins a tale of Jeff's evil deeds, but when they arrive, Stan immediately sees that Jeff isn't the monster Roger has painted him to be. Jeff recognizes Roger as having missed out on the last Wetzel's Pretzel, and despite offering it to Roger, Roger refused because Jeff had already placed mustard on it. As Stan leaves to find another solution to his problem, Roger vows to continue trying to get revenge.

Previously, Jeff was one of the victims shut inside of Dick's car trunk in "Stan's Night Out" and could be seen waiting to enter the Gaza Strip in "Faking Bad".

After Stan causes an accident while staring at a jogger in "Rubberneckers", Jeff also strikes the same driver's car doing the same. Jeff also appears in the courtroom in "Hayley Smith, Seal Team Six" and in the film about the history of the N.S.A. in "N.S.A. (No Snoops Allowed)".

Jeff is seen at the CIA sale in "Father's Daze" and is killed for stealing drug money in "Garbage Stan".

He is one of the potential census enumerators in "The Census of the Lambs", joins in the burning of the Smith home in "Stompe le Monde" and sings to Hayley at the U.S. Citizenship and Naturalization Services office in "One Fish, Two Fish".

Retrieved from "https://americandad.fandom.com/wiki/Jeff_Watley?oldid=91092"
Community content is available under CC-BY-SA unless otherwise noted.