Jeff Smith, formerly Jeff Fischer, is Hayley's husband; however, prior to their elopement in "100 A.D.", they had been a frequently on again off again couple.

Jeff was brutally beaten by Stan's boss, Avery Bullock in "Bullocks To Stan". He has also recovered from being crushed under a heavy object in "Phantom of the Telethon" and having all his skin peeled from his body by Roger in "Love, American Dad Style".

Until "Joint Custody", Jeff had not spoken to his father for years and "his mother ran away before he was born". In that episode, he went to his father Henry Fischer's farm in Raleigh, North Carolina, when trying to escape from Stan and Roger. Jeff is wanted in Florida for possession of marijuana as he had skipped bail.

In "Daesong Heavy Industries II: Return to Innocence", a navy carrier captain believes that Jeff may be his long-lost illegitimate son, and carries a photo in a locket of a woman that bears a striking resemblance to Jeff.

In "Naked to the Limit, One More Time", Jeff discovers about Roger being an alien and Stan has to kill one of them so the CIA wouldn't find out and risk his family. When Roger asks Jeff for a hug before he leaves, Roger tosses him into a tractor beam from a ship sent to pick him up from his home planet which takes Jeff away, leaving a stunned Hayley behind.

In "Lost in Space", he is forced to reveal the trickery of Emperor Zing in hiding true love from his people, setting off a revolution and escapes in a spacecraft, looking for a way to get back to Earth and to Hayley.

In "The Longest Distance Relationship", Jeff is able to communicate with Hayley though a CB radio and discovers a way to return to earth through a wormhole, but arrives 60 years in the future and learns that he cost her a chance to have a great life with Millionaire Matt Davis. Unhappy with having upset the family and giving the elderly Hayley a heart attack, he returns through the wormhole and tells the again-young Hayley to move on with her life as he sadly gives up on her, unaware that Matt is killed by Roger very shortly after. 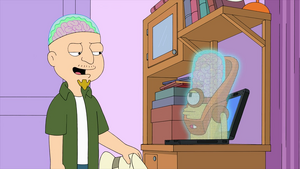 Jeff appears to return from space in "Holy Shit, Jeff's Back!", but he acts strange, causing Hayley some doubts, although his new attitude soon wins over Stan. In reality, he is an alien named Zebleer from a species that "collects" and he has come to sample more earth items, his race having dissected Jeff in order to find out more about him. Hayley and Roger board the alien mothership and find that the real Jeff has been killed previously and when they are captured, they are due to be next. Having bonded with Stan over froyo, Zebleer confesses what is going on and escorts Stan to the ship to save Hayley, noting that the froyo makes mankind worth protecting. When Hayley rejects his direct offer to replace Jeff, he instead elects to have Jeff's brain put in his body, trading his life. As they return to earth, Roger informs them that they will have their memories erased when they depart the spaceship, leaving them unaware that Jeff is no longer entirely human.

When Jeff and Hayley decide to have a baby between episodes "Bahama Mama" and "Roger's Baby", they find they cannot get pregnant due to Jeff's alien physiology. Roger becomes a surrogate to "re-birth" Jeff into a fully-human adult, although a hormonal imbalance nearly causes Roger to flee with the embryonic Jeff and rename him "Tristen." After the situation is resolved, Jeff is reborn as fully human, although he decides he is too young to have a child.

He is known to be a 'stoner', and lived in his van for some time.

He seems to be extremely easy going; He was dumped by Hayley in "Bullocks To Stan" for being a push-over. However, Stan taught him to stand up for himself by beating, electrocuting, and entombing him and they got back together. In addition, the Jeff and Hayley break up became some sort of annual tradition on American Dad!. Episodes noting the break up include the aforementioned "Bullocks To Stan", "Haylias", "Dungeons and Wagons" and "Pulling Double Booty".

Jeff also appears to care very much for Hayley, as revealed in "For Whom the Sleigh Bell Tolls", as he tells this to Stan when he heals him. In "Lost in Space", he was willing to put his privates on the line to prove that his love for Hayley is real.