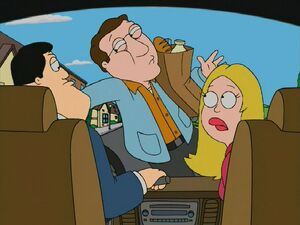 Not to be confused with Patrick Stewart

James Patrick Stuart (born June 16, 1968) is an American film and television actor. He is known mostly for his work on television shows such as CSI, Andy Richter Controls the Universe and Still Standing and voice acting in video games such as Kingdom Hearts II as Xigbar the Freeshooter and Call of Duty 2 as Pvt. McGregor.

He has a voice credit in "The Vacation Goo" and in "Deacon Stan, Jesus Man" as Doyle / Mr. Perkins / Parishioner

Retrieved from "https://americandad.fandom.com/wiki/James_Patrick_Stuart?oldid=64874"
Community content is available under CC-BY-SA unless otherwise noted.