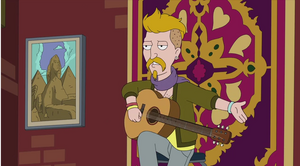 Jamal is a coffee shop guitar-playing hipster that Roger challenges to a performance duel in "Permanent Record Wrecker", believing that it will be easy to outplay Jamal, whom he is surprised is white. The loser agree to never step foot in the coffee shop again. But at home, Roger realizes that things are going to be harder than he imagined and decides to enlist the aid of infomercial star Lorenzo to win the bet.

However, Lorenzo turns out to be the devil in disguise, but Roger takes him up on his offer to winning the wager for Roger's soul. Roger succeeds in beating Jamal, but tricks Jamal into taking his place in Hell in order to keep playing.

Jamal continues to make cameo appearances, including living in a van in "The Long March" and is also later seen on the slave farm in the same episode. He is also at the farmer's market in "One Fish, Two Fish" , takes the 'RB killer' bus tour in "Exquisite Corpses" and can be seen near the piercing kiosk in "Yule. Tide. Repeat.".

Jamal is voiced by Robin Thicke.

Retrieved from "https://americandad.fandom.com/wiki/Jamal?oldid=91950"
Community content is available under CC-BY-SA unless otherwise noted.