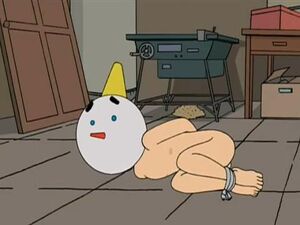 Jack in the Box is an American fast-food restaurant founded by Robert O. Peterson in 1951 in San Diego, California, where it is still headquartered today. In total, the chain has 2,200 locations, primarily serving the West Coast of the United States.

The company's mascot, Jack in the Box Man made an appearance in the Pilot when Stan used a photograph with Shelly Maxwell for the school president elections to discredit her so Steve could win. When Steve questions if it's the real Jack in the Box Man, Stan reveals that he has him tied up in the basement naked, where he is discovered by Roger, who is shocked.

Retrieved from "https://americandad.fandom.com/wiki/Jack_in_the_Box_Man?oldid=51747"
Community content is available under CC-BY-SA unless otherwise noted.