According to "Con Heir", Stan believed his father to be a top secret agent in "The Scarlet Alliance" while in reality, he was a jewel thief. After the man Stan paid to pretend to be his father died, his real father dropped in on the family, literally, jumping from a helicopter while the family was at the funeral of "Grandpa" Smith.

Roger developed a "boy crush" on Jack, but the other family members were wary of him. When Jack returns to Stan's life, taking him out to a gun range, Jack talks Stan into joining him for a mission to, supposedly, stop terrorist activity. When they arrive at the "National Gallery of Art", Stan realizes that they are actually on a jewel heist and is betrayed by his father.

It was said that Jack Smith had spent 20-40 years in prison and had been in prison in "Jack's Back", besides being in prison since Stan's childhood it had been believed he was in hiding.

However, Jack also had a softer side and when he realized that Steve saw him as a greater role model than Stan he turned himself in to the police, telling Steve in "Jack's Back" that he'd never been a good father to Stan but he wanted Stan to be a good father to Steve. However, when Stan tried to hug him, he kicked him and then explained that he had to put on an air of dominance or the people in prison would "eat him alive." Jack also ruffled Steve's hair affectionately, showing that he did feel some affection for family members. 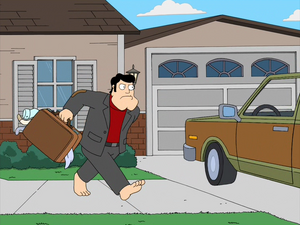 Francine recounts the story of Stan's father leaving him in a flashback in "Oedipal Panties". Stan discusses his parents break up with Steve while posing as a bully in "Bully for Steve". He is also shown in a flashback leaving in "Stan's Best Friend".

To keep "Takin' Care of Business" from returning Stan's memory in "The Boring Identity", Francine makes up a story that his father was raped to that song to keep him from listening to it.

When Steve misbehaves in "Minstrel Krampus", his grandfather Jack tells the story of how, as a boy growing up in Lower Berchtesgaden in Southern Bavaria, he captured the legendary Krampus, Santa Claus' sidekick that punishes naughty children. Tired of Steve's brattiness, Stan allows the Krampus to go free but he kidnaps Steve and demands Jack be brought to him. But when Stan uses his CIA connections to free Jack, he instead flees, leaving Stan and Roger to try to make a deal with Santa who still bears a grudge after the events in "For Whom the Sleigh Bell Tolls" but is willing to go along in order to kill the Krampus.

Meanwhile, Steve discovers that the Krampus only punishes children because he loves them and tries to set them straight and bonds with him, just as Stan and Santa arrive and Santa kills the Krampus before turning the gun on Stan. Jack, who has had a change of heart, takes the bullet meant for Stan. As Santa flees, Jack's and the Krampus' blood intermingle, transforming Jack into the new Krampus. He resolves to live out his new role to atone for the wrong he did.

When Steve turns the tables on Stan and traps him in the CIA hologramdeck in "I Ain’t No Holodeck Boy", he has Stan relive some of his childhood including times before his father left him.

He is listed as a possible owner of the mineral rights under the Smith property in "Mine Struggle". In addition, Stan recycled a game they had played in his youth with Steve.

Santa kidnaps children and forces them to work in a mine at the North Pole in "Ninety North, Zero West". When Steve is accidentally kidnapped as well, the family sets off in pursuit, aided by Jack Smith/Krampus. Santa captures them all and reveals that his plot involves finding gemstones taken from the eyes of a Sumerian giant, entombed at the North Pole that can give him supreme power. However, his plan backfires when the giant is reawakened, and sucks in much of the North Pole, including Santa himself after Jack drops him in. Steve manages to decapitate the giant with a Christmas train and Jack decides to take over Santa's Castle.

Jack temporarily abandoned Stan in "Klaustastrophe.TV at a Harlem Globetrotters basketball game. They temporarily took him on tour with them until Jack returned and they had to give him back. When Stan suffers anxiety attacks and visits the Globetrotters farm to find out the truth, he was unaware of his father passing him by. Jack wasn't thrilled to see his son at the time. In this instance, Jack is seen in his human form instead of Krampus when Stan leaves.

Jack is gunned down following a robbery at the Metropolitan Museum of Sports Memorabilia in "Ghost Dad", and finds his spirit bound to the Smith home after a séance by Roger. When the family gets tired of his antics, they consider an exorcism and Jack offers to help, but actually uses the opportunity to take over Steve's consciousness. Stan discovers the ruse, and that Jack is about to try to rob the museum again, where he plans to use his small frame to get past laser security for his true target: the first pitcher of Arnold Palmer tea and lemonade. Stan and Roger, having figured out the plot, arrive to stop him. Jack refuses to surrender, but Stan's pleas allow Steve to climb out of his subconsciousness and force out Jack, who's spirit becomes trapped in the museum when the others escape. Despite already being established as Krampus, and even being referred to as a "seasonal evil spirit of christmas", Jack appears in his human form throughout the episode.

Steve tries to put together a family tree that includes Jack in "The Old Country".

Jack appears during "Everyone is Happy in Utopia" in "300".