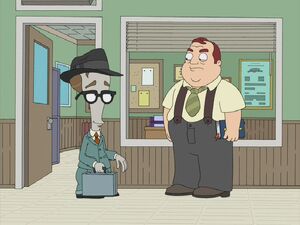 Jonathan Kimble "J. K." Simmons (born January 9, 1955) is an American actor. He is known for his work in NBC's Law & Order and The Closer. In 2015, Simmons would win the Academy Award for Best Supporting Actor for Whiplash.

J.K. provides assorted voices including Mr. McCreary in "The One That Got Away".

Roger's abusive clown professor in "The Mural of the Story" is based on J.K. Simmons' Terence Fletcher from the film Whiplash.

Retrieved from "https://americandad.fandom.com/wiki/J.K._Simmons?oldid=90502"
Community content is available under CC-BY-SA unless otherwise noted.