For a complete script, see: "It's Good to Be the Queen" on the Transcripts Wiki

Francine: Boy, whoever adopted this part of the highway is really keeping it clean. Thanks...[reads a sign] Ku Klux Klan.

Stan: Aw, come on, guys, no wet willies! I just Clearasiled my ears!

Stan: That's okay, Francine. You don't have to remember her name. You were the homecoming queen. [puts the tiara on her]
Francine: Don't, Stan. I'll look silly.
Stan: If by "silly" you mean beautiful, then, yes, you do look silly. Hell, you look downright retarded. 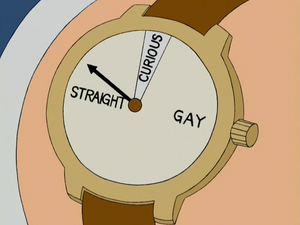 Quacky: Apparently, Betty Sue was so devastated by losing homecoming queen, she walked into a Dunkin' Donuts and never came out. And speaking of coming out... ta-da!
Stan: So that's why you're so pale. This is the first time you've come out of your house. Welcome! This is a necktie, and that's a table.
Quacky: No, I'm gay.
Stan: What?! My gay-dar is totally off! [Looks down at watch that has 3 columns: Straight, Curious, and Gay; the pointer is on "Straight"] Damn! SkyMall screwed me again!

Francine: You know what, Stan? If it's so darn... no, damn! That's right, I went there. If it's so darn important for you to dance with the Homecoming Queen, why don't you just go with Betty Sue?!

Betty Sue: I hope this isn't awkward.
Stan: Awkward? Don't be silly, it was Francine's idea.
Francine: I was being sarcastic! Or don't you get sarcasm, genius?
Stan: Oh, I think I get sarcasm, and I'm hardly a genius, but still, thank you; that's awfully sweet of you.

Stan: That's a great story about being old and alone. It's like you've been walking around dead for 20 years and no one's had the decency to cremate you and sprinkle your ashes over Old Maid Mountain.
Betty Sue: Wow, that's quite a line.
Stan: Well, it's actually more of an assessment of your life.
Betty Sue: No, I mean the line to get in. What you just said was emotionally devastating.

Stan: [while daydreaming; shooting his gun] And you, and you, and you!
Dick: Stan! Stan wake up!
Stan: Huh? Oh, sorry, must have zoned out.
Dick: You just shot Jackson 8 times!
[Jackson groans and falls to the ground]
Stan: Oh, my God, Jackson! Hang on, buddy, you're gonna make it!

Guy #1: It's all set, right?
Guy #2: It's gonna be just like in Carrie. [pulls the rope and several squealing pigs fall on Stan]
Guy #1: Pigs? It was supposed to be pig's blood.
Guy #2: I didn't finish the book.
Guy #1: You stopped reading after the word "pigs"? That wasn't even the end of the sentence.

Roger: Okay, Steve, when people start a sentence with "what delivering pizzas has taught me", that's the go ahead to tune out.

Retrieved from "https://americandad.fandom.com/wiki/It%27s_Good_to_Be_the_Queen/Quotes?oldid=87493"
Community content is available under CC-BY-SA unless otherwise noted.