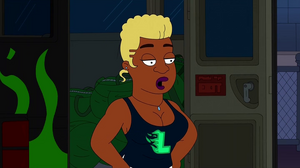 Iris is captain of the Langley Hot Broads lesbian roller derby team, where she has the nickname "Luck of the Iris."

In "LGBSteve", Hayley is invited to try out for the team, but can only find acceptance if her "sister" Steve can also join when they discover that he is a natural skater but mistake him for a girl. Hayley gets him to go along with the charade by suggesting that he could find himself getting into very suggestive situations. Not only to the situations turn out to be more than Steve could ever imagine, but he finds himself drawn to Devin. When they start to get too close at a party at Iris's Body Shop, Hayley tries to break things up by reminding him that he is posing as a girl and doesn't want him to get caught. But when she tells Hayley about future plans that she and Steve have made to open a restaurant, Hayley tries to muffle Steve again but he calls her bluff. She decides to out Steve as a male, only to find that everyone is already aware of it, leaving both herself and Steve confused about their own sexual identity. Steve concludes that he is really a boy and breaks the news to the team where they accept his decision but make him agree to perform in their last match, helping him continue to pose as a girl by taping up his genitals as a team.

Iris is voiced by Loni Love.

Retrieved from "https://americandad.fandom.com/wiki/Iris?oldid=60859"
Community content is available under CC-BY-SA unless otherwise noted.