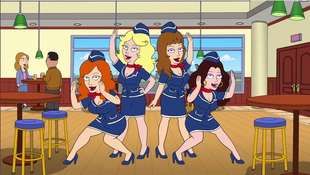 Introducing the Naughty Stewardesses
Stan and Francine join forces with a group of stewardesses to stop a terrorist plot to destroy the sun. 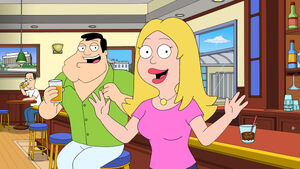 As Stan and Francine wait at the airport to take a trip to Hawaii, Stan surprises Francine by announcing they are headed to Sacramento. They overhear several stewardesses talking and Francine notes that they are having fun and Stan agrees. The stewardesses convince them that they should make their own fun and introduce themselves. As they converse over drinks, they spot Mark Cuban who gets stewardess Margie to talk Stan and Francine into getting them hired as stewardesses as well. In the air, they notice Mark Cuban's bodyguard has an oversized carry-on he refuses to relinquish. The girls create a diversion for Stan who gets the bag and discovers plans to blow up the sun. At Mark's mansion, they sneak in at a party to stop the plot. After confronting Mark, he reveals that he was really plotting to blow up the Suns basketball team for potentially being at the top of their division and further admits that "blow up" was a poor choice of words for what amounts to dirty tricks. But the stewardesses burst in and reveal they are the official supporters of the Suns and defeat Mark. 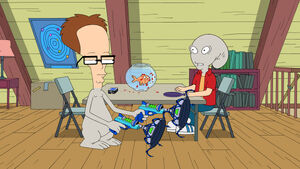 Meanwhile, Steve does the homework for Jenna, a girl he has a crush on, but she and her boyfriend Figgus blow him off. But after Figgus breaks up with her on his football coach's orders, Steve sees his chance but can't work up the nerve to talk to her. As Steve plays games with Roger, he opens up about his problems. Roger talks him into switching faces by surgery instead of costumes. As Steve worries about Roger messing things up, Roger treats her like trash and wins her over. But when Steve wants to take over, Roger refuses to switch faces back and stays in Steve's body. At the dance, Jenna reveals to Roger that she is pregnant and expects to stay with him. Roger rushes home to swap places back but neglects to tell Steve what to expect. Steve mistakes her intentions and is introduced to her parents where he finds out she is pregnant. As her parents start to fight with him, he calls Roger who advises him to abandon her. He refuses until Roger reveals a plot to get Figgus back into the picture by swapping faces with his football coach. Steve takes the news of the breakup well as the coach helps them win a bet to get his face back.