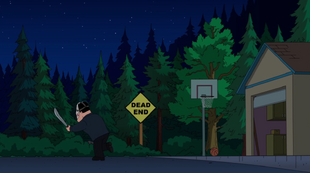 Into the Woods
Stan tries to make amends with an old classmate. 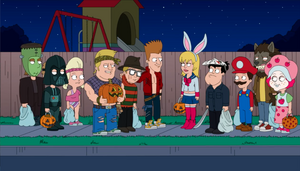 When Stan and Roger stop for sub sandwiches, he spies Tommy, an old middle school classmate working there that he abandoned when they were picked on by bullies while trick-or-treating. After following him around to see if his lifestyle is a choice, Stan decides that he ruined Tommy's life. To set things right by apologizing, he has to take Francine along for support when Roger bails out after feeling an illness coming on. But when Stan delivers his grand apology, his old friend doesn't even remember who he is. 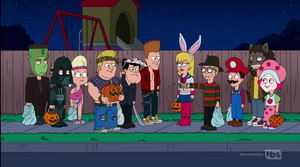 Undeterred, Stan decides he's going to help him regardless. Insisting that he became a loser because of him, Stan finally reminds him of their past. But when he continues to go to his regular job, Stan feels that he failed and personally escorts him around to dressing up for an executive job. But Stan's interference to try to get him more money backfires, and to make matters worse, Stan had burned down the sub shop so he couldn't go back. Trying a different tactic, Stan tries to re-enact their trick-or-treat night, but they are robbed by other teenage bullies. Tommy finally insists on enough, reminding Stan that he was the one who ran from the bullies originally when abandoned by Tommy, and had misremembered the event. 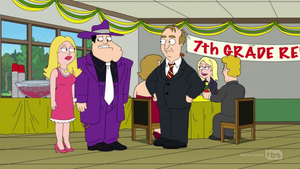 Unable to cope with being a loser, Stan takes to living in the woods despite Francine's efforts to bring him back. She hits on the idea of hosting a middle school reunion to prove that Stan isn't the biggest loser in the group, but Stan comes up short against his classmates. Apologizing to Tommy because he thinks he cost him his job, Tommy admits he actually owns the entire sub chain. When the old bullies show up and harass Stan, Francine bails on him just as Tommy did in real life, but during the car ride home, Stan manages to reverse his memory, so he thinks he abandoned Francine, who accepts his apology as Roger's cold finally sets in.

Previous Episode /// Into the Woods \\\ Next Episode

Retrieved from "https://americandad.fandom.com/wiki/Into_the_Woods?oldid=87873"
Community content is available under CC-BY-SA unless otherwise noted.