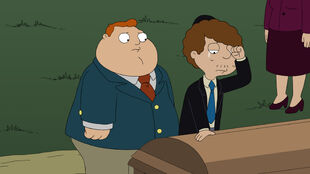 Independent Movie
Snot deals with his emotions when his father dies. 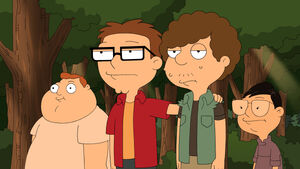 During Hideki's birthday party at the Yoshida household, Stan and Roger admire Hideki's business acumen which he attributes to following his "gut feelings." As Stan and Roger both make note of how long it took to cut the cake, they hit on an idea to cut a cake into multiple identical pieces at the same time and, with a matching "gut feeling," Hideki cuts himself in as an investor.

After expressing his interest in independent films while building Lego figures of Ron Howard for a competition, Snot smells a deli platter and finds his Uncle Ira who brings news of his father's death. However, he intends to blow off attending the funeral to go to the competition with the guys. Steve talks him into going to the funeral with his friends just like in an independent movie. With Steve narrating along the way, Snot talks about his past with his father who he felt didn't really care for him. They stop to pick up a hitchhiker, but when Steve stops to lead them into the woods, the hitchhiker bails out while Steve tries to share a moment with Snot and the guys. Steve builds a figure meant to represent Snot's dad for him to show some emotion with but he refuses as Barry takes out his own frustrations on it. Snot is resigned to the knowledge that they will all die as they suddenly realize that Toshi is missing. They find him in a cornfield where he decides to stay and become one with the corn. 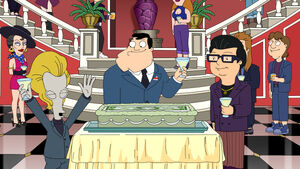 The cake cutter gets a showing on a shopping network as the remaining guys walk into a motel but Steve spots a pixyish, blue-haired girl and introduces himself. Snot goes for some food, only to have the package get stuck with a message showing that suddenly causes him to have an emotional response and suddenly realize he must see his dad one last time. As Steve's girl skips off to share a picture of the two of them, Snot tries to share his revelation but Steve is otherwise occupied pursuing her, leaving Barry and Snot to travel alone. Steve gets to know the girl and her eccentricities but she cuts him off when she finds he abandoned his friend for her. Steve hitches a ride to catch up as Snot and Barry arrive graveside, only to leave them alone.

As Stan, Roger and Hideki celebrate hitting it big, their "gut feelings" cause them all to suddenly pull guns on each other and the screen goes black. A shot is heard as Roger proclaims that Hideki was shot.

Retrieved from "https://americandad.fandom.com/wiki/Independent_Movie?oldid=92538"
Community content is available under CC-BY-SA unless otherwise noted.