To start a complete script, see: "Iced, Iced Babies" on the Transcripts Wiki

Ethan: Professor. Hayley. Shrimp gruyere puff?
[Roger and Hayley eat his appetizer, enjoying it]
Roger: Oh, Ethan. You should be a professor of food.
Ethan: Thanks. I've always wanted to cook, but my father never supported me. But, now you've inspired me.
Roger: Well, that's why I became a professor, Ethan. To inspire people, inspire them to respect me.
Ethan: Oh, and you now how you told us to...make a change for the better? Well, I took your advice...and stabbed my father THIRTY-EIGHT TIMES!!! [manically laughs while Hayley and Roger stare at him, shocked beyond words] Daddy! Daddy! [continues laughing and does stabbing motion while Roger gets one of the shrimp]
Roger: [to Hayley] Not eating isn't going to bring him back.

Francine: I'm having a baby.
Stan: No! [Francine pepper sprays in Stan's eyes] My eyes! [Stan runs into the door] My mouth! [Stan runs back into the side table] My back! [Stan looks at a dead plant on the dresser] My begonia! [Stan accidentally turns on the radio, "My Sharona" plays] "My Sharona"! [Stan backs up into the television, accidentally turning on "My Best Friend's Wedding"] My Best Friend's Wedding! Ah, my eyes again!

Stan: [at work] Francine, what are you doing here? This isn't home.

Stan: A world without children. Future generations will thank us!

Kichiro: Your vasectomy is about to beginning!

Stan:: [being washed away by a wave of what he thinks is sperm] Ugh! I feel like Tara Reid on an average Tuesday.

Roger: I can't wait to enroll here, people are finally gonna take me seriously.
Hayley: Don't they have college on your planet?
Roger: Yeah, but if you're not Asian, it's impossible to get in.

Francine: It's so cute that Steve has a little girlfriend.
Stan: Well, don't tell Debbie about her because she'll eat her. 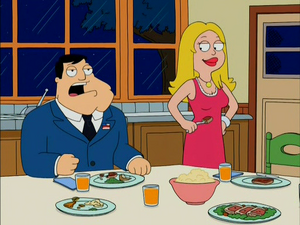 Roger: Why does nobody respect me?
Hayley: Roger, you're an uneducated alcoholic. You don't know anything except QVC return policies.
Roger: That's a specialty, yes, but I have a lot of smart opinions, and...
Stan: Can it! You're the Adam Sandler of this house, and nobody wants Punch Drunk Love. Just give us Waterboy.

Francine: You know, cucumbers are just brineless pickles. I could have de-brined his pickles! Who does that fatso think she is?!
Stan: Oh, is Debbie a larger woman? I hadn't noticed.

Steve: I don't have any drugs! I'm totally clean!
Principal Lewis: Do you expect me to take your word over that of an anonymous tipster?

Klaus: Francine, why not just replace Steve? You know, have another baby.
Francine: Stan would never go for another kid. His mind is made up.
Klaus: It's not his mind you need.

Hayley: Roger, how'd you come up with that lecture?
Roger: Ah, I just stitched together a little Mr. Holland, a little Dead Poets, and the rest is just lies.

Ethan: Professor, I was wondering if you'd like to come to dinner at my home. Hayley, you should join us, too.
Roger: Hayley, just so we're clear, you're only coming because you got caught in the gravity of my invite. I was so invited that it invited everything around it.

Stan: What does Steve see in Debbie? Maybe he's going to turn her into condos.

Stan: [after waking up while Francine's trying to have sex with him] What the? Rape! Succubus!

[Steve is upset after Debbie breaks up with him]
Francine: Well, no girl will ever love you as much as Mommy.
Steve: They...They won't?
Francine: Oh, heavens, no. Even Debbie didn't find you attractive.
Steve: She didn't?
Francine: No, not even a little. As a woman, I could tell.
Steve: Mama...
Francine: That's okay. You can stay right here at home with Mommy...forever.

Retrieved from "https://americandad.fandom.com/wiki/Iced,_Iced_Babies/Quotes?oldid=87520"
Community content is available under CC-BY-SA unless otherwise noted.