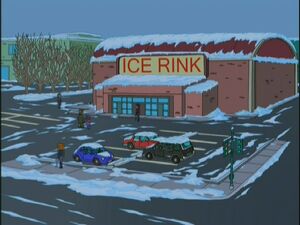 The Ice Rink is where Francine enters herself and Stan in an ice skating competition in "Of Ice and Men". Stan is horrified to skate with Francine because of his competitiveness, but when Roger discovers the contest's prize is a set of wigs which he wants to play with, Roger convinces Stan that he and Francine should participate. Stan quickly becomes overly competitive with Francine and eventually dumps her as a partner in favor of Roger, who turns out to be an excellent figure skater. At the competition, Stan sees a rather inept elderly couple who, despite their low score, are happy and enjoy each other, causing him to realize that he should be skating with Francine. He rushes home, tranquilizes Francine, and brings her to the rink. She wakes up with the two of them skating, and the two argue as they do a flawless routine. They leave without seeing their score. Roger manages to win the competition with Terry Bates after disabling Greg Corbin.