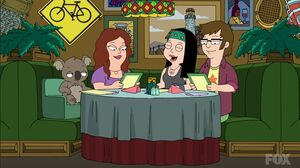 Ian was Hayley's former boyfriend. He was first mentioned in "The Return of the Bling". In "Cops and Roger", Hayley suggests a date between Reginald Koala and his girlfriend Rhonda. Their date first takes them to Houlihan's where things immediately go downhill. Later at Parsons Cinemas, Ian slips away to the restroom while Reginald share secret thoughts of being together despite their separate love lives. Later, Reginald reveals to Hayley later that Rhonda and he have broken up Hayley responds that she also broke up with Ian and Reginald suggests a date that Hayley accepts. After Reginald leaves, Hayley calls Ian and breaks up with him.

Retrieved from "https://americandad.fandom.com/wiki/Ian?oldid=51720"
Community content is available under CC-BY-SA unless otherwise noted.