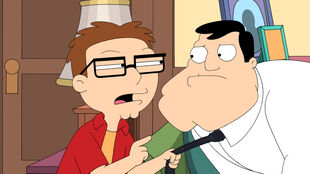 I Am the Walrus
Steve challenges Stan for family dominance. 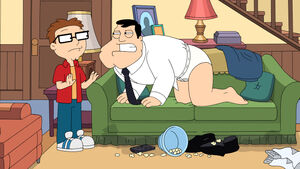 When Steve finishes his dinner before Stan, Stan starts to become stressed that he is losing his dominance. Stan tries to reassert himself physically until Steve catches on that his father is feeling weak thanks to Francine. Soon, Steve manages to finish everything before Stan realizes he can still mate while Steve can't. After putting on a display for Steve, Steve retreats until Roger volunteers to help Steve lose his virginity after a number of distractions. Taking Steve to a party, Roger reveals another secret life as a high school student. Klaus tells Stan of Roger's plan to get Steve laid and Stan rushes to the party to find Steve is a complete dud. Roger congratulates Stan on raising Steve so that not only would he never be able to challenge Stan, but Steve will never be able to have kids to challenge him. Stan realizes he's raised Steve to be a failure and promises him to help him be a man, although he starts by teaching him how to shave rather than having sex.

Meanwhile, Jeff and Hayley bicker while assembling furniture and start to worry that their marriage is already going stale. They sign up for free marriage counseling only to find that Principal Lewis is hosting the session for money for his prized watch collection. When they are interrupted by another incoming class, Principal Lewis suggests they continue their sessions at his place where he forces them to clean his house. When they begin to worry about ever getting out of the house, Jeff pulls out a bottle of pills he got from Roger's persona of Ace Chapman capable of causing paralysis for the intent of date rape intending to paralyze himself so he can't work. Principal Lewis takes the pills himself and becomes paralyzed, allowing Jeff and Hayley to gain the upper hand and steal one of Lewis' watches as payment. Back at the house, Principal Lewis arrives to talk and recover his watch. He points out that he manages to get the two of them to quit fighting in order to take him down. When they agree that his tactic worked, Lewis' asks for his watch and more of the pills from Jeff, knocking himself out again.

When Stan teaches Steve how to shave, it's revealed that Steve has been shaving Principal Lewis' back. When Roger wanders in as Ace Chapman and sees the paralyzed Lewis, he offers to take over from there and drags off the body.

Previous Episode /// I Am the Walrus \\\ Next Episode

Retrieved from "https://americandad.fandom.com/wiki/I_Am_the_Walrus?oldid=92417"
Community content is available under CC-BY-SA unless otherwise noted.