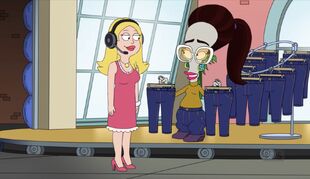 I Am the Jeans: The Gina Lavetti Story
Francine tries to be a better friend to one of Roger's personas.

Roger's Disguise: Richard Langly in the X-Files from "Paranoid Frandroid" 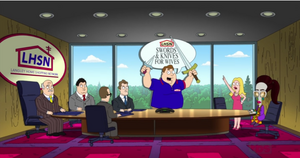 When Francine discovers that she is on the outs with her former best friend Gina Lavetti, she agrees to go clothes shopping with her. However, Gina is frustrated when she can't find any jeans in her size, so she decides to create her own brand. After carefully studying the process of how jeans are made, a final design comes to her during a dream of a giant pair of jeans. Francine is impressed and convinces her to take her product to the Langley Home Shopping Network. The producers are reluctant at first, but Francine convinces them to let her on. 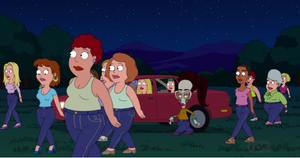 After an initial bout of stage fright, Gina has success in selling two units. Francine is convinced she could do better, and with her help, is soon selling out consistently. But when Francine demands Tuttle's prime 3 a.m. slot, she finds she is shut out by the all-male production staff. As payback, she sabotages his gimmick of slicing a penny with his knives and gets him fired. However, her actions irritate Gina, who looked at Tuttle as a mentor, and breaks off their friendship. She hires Tuttle to be her co-host, but several customers start reporting that the jeans are taking over their lives and seemingly acting of their own accord, driving their wearers towards a common gathering ground. Francine heads there and finds Gina with a host of other women marching towards the gathering space, where Roger reveals that he used a little bit of his spaceship seat belt in the cotton blend, which is sentient and self-replicating. Together, they convince all of the women to shed the jeans and break the spell, as the discarded jeans form the giant jeans that Roger saw in his dream. The producers from the Langley Home Shopping Network see the giant jeans and try to grab hold of it, but it launches itself into space and takes them with it. 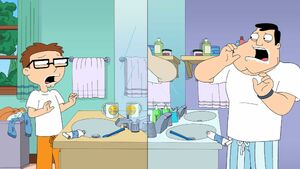 Meanwhile, when Stan and Steve get frustrated over their eyebrows, they wish they had each other's. But when it comes true, they decide the only sensible thing to do is to take each other's places through the day. Stan finds himself stuck in Steve's classes while Steve is sent on a mission that involves a parachute jump from a helicopter into a terrorist stronghold. When they compare notes at the end of their day, Steve's light weight resulted in his missing the drop zone and caused the death of a team member, while Stan failed an unimportant test and ended up showing his penis.

Previous Episode /// I Am the Jeans: The Gina Lavetti Story \\\ Next Episode

Retrieved from "https://americandad.fandom.com/wiki/I_Am_the_Jeans:_The_Gina_Lavetti_Story?oldid=82681"
Community content is available under CC-BY-SA unless otherwise noted.