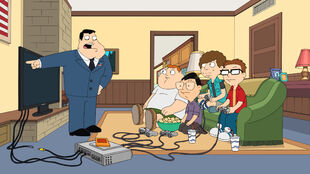 Tired of the boys playing inside

I Ain’t No Holodeck Boy
Stan shares his childhood memories. 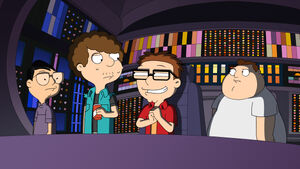 When Stan tries to get the boys to relinquish the television, he becomes irritated when they continue playing their video games rather than go outside. After telling them tales of throwing rocks and finding his first dead body, he discovers out they have never really had an adventure outdoors. He wants to take them to the woods but Francine refuses to allow him.

At CIA headquarters, Avery Bullock introduces the agents to the new hologramdeck. As part of the experiment, the CIA recorded the agents' memories and Stan decides to use that to subject the boys to his own experiences in the woods. He slips the boys hamburgers laced with knockout pills and when they awake, they find themselves in the forest while Stan manages their experience in the control room. Deciding that they are not reacting enough, he turns down the heat and sends in a bear. Knowing this is some sort of trick, the guys are worried but Steve is reassured that Stan wouldn't hurt them. But when Stan takes a break, Steve finds a control panel and triggers a malfunction. When Stan goes to fix it, the boys slip past him to the main control room and decide to subject Stan to a taste of his own medicine. Using Stan's own recorded memories, the boys send Stan back into his past. Stan recognizes he is in a projection but actually enjoys himself while trying to find his way out. The boys try to ruin his memories, but Stan isn't fazed. Snot decides to change the code, but the hologram of Stan's first dead body experience, augmented with their own "improvements" from their video game Nazi Natal Nightmare, turns deadly to Steve's horror.

Steve decides that he needs to enter the simulation himself to save his dad. As Stan tries to evade the oversized zombie, Steve tries to take out the zombie with holographic armor and weapons, but fails and finds himself trapped with Stan. Sending in the baby Hitler from their video game to give the zombie a weak spot, Stan's skill at rock throwing allows them to beat the zombie and they bond as Bullock enters to bathe with an alien. 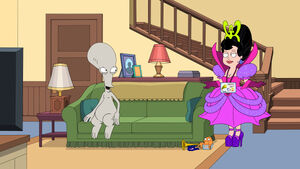 Meanwhile, during a commercial for the international star registry, Roger belittles the idea and accuses Hayley of throwing her money away to help the poor in Africa by buying a goat. She objects to his refusal to care and vows to find out what he really cares about. To surprise Roger, Hayley buys the sun that Roger's home planet orbits. He pretends to not care, although that night, he ransacks her room but continues to feign indifference. Taking it up a notch, Hayley dresses up in thrift store clothes and presents herself as Roger's new queen. Roger decides to go acquire the goat Hayley sent to the poor in Africa to threaten her to surrender the certificate. That night, Hayley finds that Roger isn't satisfied with having his sun back as he has her goat served up for family dinner.

Previous Episode /// I Ain’t No Holodeck Boy \\\ Next Episode

Retrieved from "https://americandad.fandom.com/wiki/I_Ain’t_No_Holodeck_Boy?oldid=79295"
Community content is available under CC-BY-SA unless otherwise noted.