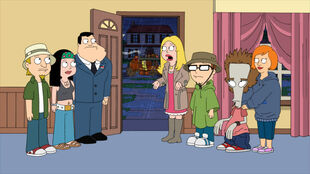 Hurricane!
Part of FOX's Night of the Hurricane with a hurricane affecting all three Seth MacFarlane shows.

Plot: As a hurricane hits Langley Falls, Stan and Francine worry about the approaching storm with Stan dismissing Francine's concerns as he feels it is his duty to protect the house. Steve admires a set of blueprints to the house he got for his junior architects society. Hayley worries about the zoo animals during the storm but Jeff convinces her they'll be alright and suggests they get high. Roger meanwhile is trying to ditch a one night stand who is being possessive towards Roger. 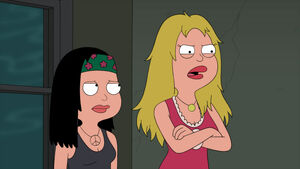 Buckle arrives to tell them they should evacuate with him and Sharri in an amphibious vehicle he's prepared. Francine is ready to leave but Stan assures her he's prepared the house for an emergency, stocking food and sealing the house. Stan and Francine argue whether or not to stay or leave. Jeff and Hayley side with Stan, whilst Steve, Francine and Roger's date side with Roger's plan to leave. Buckle and Sharri are ready to go, but a wave hits and they are washed away. Francine is furious they they missed their chance to escape while Stan thinks that if they had tried to escape with Buckle and Sharri they would have also perished. Studying his blueprints, Steve becomes concerned about Stan having sealed the house just as the house starts to float away. Seeing themselves convinces Steve and Francine of Stan's continued bad judgement. When Stan suggests they go to the attic and higher ground, Francine thinks they should stay on the ground floor so they can be rescued easier. Stan, Klaus, Jeff and Hayley head up to the attic and the rest stay downstairs as the Hurricane worsens. Stan attempts to stop the house from floating away by fashioning an anchor out of Roger's wine fridge despite Francine's reservations. The anchor causes the house to flip upside down causing Stan's group to be trapped in the attic and Roger's date becomes impaled on an antler chandelier. Klaus is amused by the turn of events until he realizes that the water rushing into the attic is salt water which burns his goldfish skin. Francine becomes concerned about rescuing Stan and the others. Roger is reluctant to help after what Stan did to his wine fridge but Francine convinces him to help in order to save his wig collection. With Steve's help from his blueprints, Francine's team saves the others from the rising water, although Roger is upset that they lost his wig collection and shuts the attic door on Klaus as the group heads to higher ground.

Trying to climb up the rope fashioned from the curtains back to the original first floor, Jeff panics and tears down the rope, trapping everyone on the second level of the house. Desperate to prove his worth, Stan decides to open the window to flood the second floor and float everyone to the original ground floor. Francine still has reservations but Hayley convinces them that Stan can't be wrong every time and opens the window with everyone's approval, allowing a shark along with more water to come in. The shark abducts Hayley while the others are hit by water. Stan collapses from his failure to protect the family. When Francine hears a moan from Hayley, they go looking for her, finding Steve's porn collection in the process. Roger comes across his date floating in the water and still clinging to life. When she talks of inviting him to dinner with her parents and having lots of babies, he pushes her back underwater. Stan disbands from the group knowing his errors while a wounded and pale Hayley is found floating on top of a dresser. Just as Francine grabs Hayley, the shark smashes into the dresser, forcing it through a window and allowing more floodwater into the house. The shark circles and lunges for the group, smashing though the bedroom door that Francine closes behind them. The rising water enable everyone to reach the original ground floor of the house, although the shark snatches Steve's blueprints when he stops to consult them. The water continues to rise and the shark corners all of them as Stan sits in the kitchen in grief. Klaus finds him and convinces him that sooner or later, he has to make the right decision. Hearing the family struggling with the shark, Stan gets another idea to use a bear floating by from the zoo to eat the shark, but the bear decides to try to eat the family instead, wounding Steve. Stan tries to electrocute the animals when he spots some sparking wires but ends up shocking Roger instead. Jeff tries to talk him out of anymore ideas and Stan beats him senseless. Francine tries to put her foot down and demand that Stan go out and get help. Stan refuses and spots his old college javelin floating in the water. Convinced he can harpoon the bear so the blood will distract the shark, he harpoons Francine instead. Just then, Buckle enters the house and tranquilizes the shark, bear and Stan, rescuing the family. 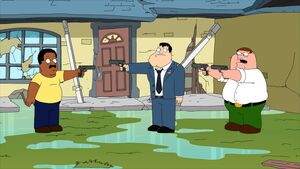 Waking up the next morning as their house is being turned right side up, Buckle explains that he knocked Stan out as he wasn't sure who was doing the most damage. Stan tells him it's okay and he made the right call. Francine is still in shock that Stan harpooned her, despite her insistence on getting competent help. Stan explains that he feels he should be the protector of the house in a crisis. Francine tells him that he could be a bigger help by getting the hell out of the way and doing nothing. Stan thinks it over but points out that there is no way he will follow her advice. Deciding to survey the damage, Stan steps outside and finds Cleveland Brown and they hold each other at gunpoint, then Peter Griffin holds both at gunpoint. When Cleveland points out to Peter that they know each other, Peter tries to stop and think. Then Francine steps out and Stan accidentally shoots her, eliciting a positive comment from Peter on American Dad!’s predictability.