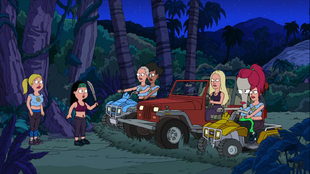 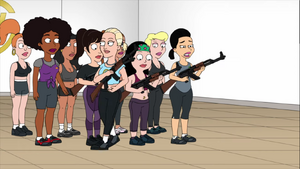 Hayley takes an investigative journalism class with the idea of becoming famous, but her professor smashes her hope when he points out that journalism is dead. As Francine vows to let Hayley sink or swim on her own, Hayley tries to prove him wrong when she sees some well-stacked women and decides there is a story in it. She is almost deterred by the cost of joining their gym, but a few words from the charismatic owner convinces her to join anyway. At home, Francine recognizes that it has all of the hallmarks of a cult, having belonged to several. Things take a dark turn when the former discovers they are willing to take extreme measures to stop a fire inspection that could shut them down. When Francine realizes that Hayley is not going to bail out, she tries to get involved to convince Hayley to get out. However, not only does Roger get involved instead of acting as their getaway driver, but he accidentally shoots the inspector after tripping on a loose floorboard, receiving one of the group's coveted tank tops. As the group prepares to flee the country, Francine stabs Hayley in the back to receive one of the group's tank tops. But when she gets a second chance, she tries to return the favor by betraying Francine, but they both find themselves held by the group. 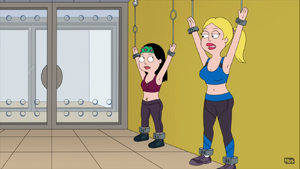 After working their problems through, the pair decide their best course of action is to lead a revolt. Just as the girls start to follow them out, Roger enters with his gun in his hand and trips on yet another loose floorboard that caused him to shoot the inspector. The bullet passes right through the leader, who starts to glow, convincing everyone that she is really a God. As everyone bows at her demand, Hayley notices that she is standing on a strange platform with an electrical cord. An investigation reveals that the leader is really a hologram controlled by a disgusting perv in a closet in the style of The Wizard of Oz, whom the women beat up after learning of his deception.