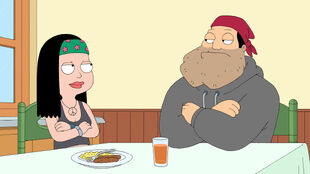 Honey, I'm Homeland
Stan is captured and returned home by a group of radicals, but he starts to display leftist tendencies. 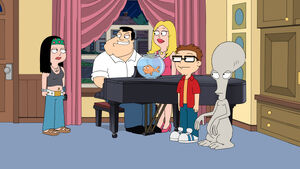 Stan attempts to infiltrate the "Occupy" movement, based on CIA intelligence that a leftist cell is planning a terrorist attack. Hayley tries to open his eyes to opposing viewpoints but is brushed off. But when he's captured due to Hayley setting him up, he is subjected to mental torture in order to “re-educate” him. Stan is forced to broadcast their opinions while in captivity as Hayley realizes that she is responsible but he escapes and returns home. Hayley expresses her happiness that he has returned home but Stan starts to exhibit strange new leftist tendencies. Hayley realizes his behavior isn't like him and begins to wonder if he has been coerced. 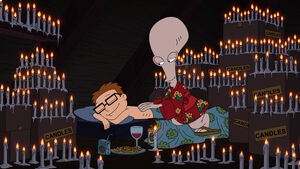 She follows him as he continues being environmentally friendly and doing good deeds. Later that night, she confronts him during a family sing-along. Stan is able to excuse his actions by claiming he was being robbed and his peace tattoo appears changed. Hayley sneaks into his office to get an idea of what he is up to and discovers back road maps to national monuments on his computer. She confronts him, but he dismisses her concerns until he is able to knock her out and takes her to the leftists who kidnapped him and planted the idea of performing terrorist acts.

Roger decides to use Stan's captivity as an excuse to sell candles in his memory but his idea fails to get off of the ground when Stan returns. He tries to get the rest of the family to contribute but they refuse despite his using an ax on the fuse box. As Steve borrows a flashlight, Roger despairs over being able to recover his expected use. Seeing Steve's face in the candlelight, they both find themselves attracted to each other and Roger proposes lighting more candles.

Stan and the terrorists take Hayley to Mount Rushmore where they plot to re-sculpt it into figures of leftists. Hayley seems to be excited by the plan and asks to go to the bathroom. She calls Bullock but he blows her off expecting sex talk. She ends up calling Roger and Steve but they are busy with their own actions until they get caught by Francine who breaks the mood. Hayley tries to reason with Stan who insists that he did what she liked but she begins to get through to him over his hatred of her beliefs and finally succeeds just as the group is ready to launch their missiles and he beats them in a fight. As Hayley and Stan embrace, one of the terrorists launches the missiles. As they fly through to their target, an anti-missile defense activates and takes them out. Bullock arrives and reveals that Stan was used by CIA agents in disguise to test the defense as Hayley can't believe that all the money that could have helped those in need was wasted on the defense. Faced with the prospect of having to talk to her on the long drive back home, Stan knocks Hayley out with a dart and packs her off to return home.