For a complete script, see: "Homeland Insecurity" on the Transcripts Wiki

Stan: Stupid gas guzzler that I, as an American, have every right to drive. 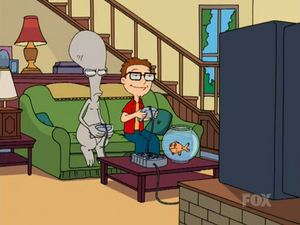 Steve: The alien in this video game is awesome! He shoots laser beams, he levitates... he's the coolest alien ever! [Roger glares at him] Oh, I didn't mean...
Roger: No, no. No. You said it. It's out there. Now we have to live with it.
Steve: Well, it's kind of true. You don't have any special powers, do you?
Roger: I'm a good listener. Do you know how rare that is in this universe?
Steve: Yeah, that'll take down an F-14.

Stan: Well, I think I'm fully strapped.
Klaus: There might be some room left in the vast wasteland between your testicles and anus, hmm?
Stan: Nope, occupado.

Stan: If you're ever taken hostage by, say, a neighbor, and you end up on Al-Jazeera, just blink your coordinates in Morse code like this, and I'll have a bomb dropped on your location.
Steve: But then I'd be dead.
Stan: Oh come on, sport. There are plenty of kids in heaven to play with. Your cousin Billy. That little girl from Poltergeist. She must be at least 16 by now. You could totally hit that.

Retrieved from "https://americandad.fandom.com/wiki/Homeland_Insecurity/Quotes?oldid=88942"
Community content is available under CC-BY-SA unless otherwise noted.