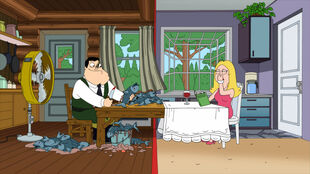 Home Wrecker
Stan and Francine fight over how to redecorate the house.

Roger's Disguise: Morning dress from "The People vs. Martin Sugar" 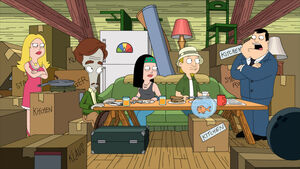 After Hayley is hit in the forehead with a plate from the cabinet, she and Jeff start arguing over their new checks.Stan admonishes Jeff and Hayley about their bickering and points out Stan and Francine's romantic harmony. Hearing from Roger that Greg and Terry just remodeled their kitchen, Hayley, Jeff, Stan and Francine head over to take a look. Admiring the new kitchen, they consider their own remodel but Greg and Terry tell them their marriage couldn't handle the strain. Stan takes up the challenge; if they can remodel without breaking up, Greg and Terry will pay for the remodel. If they fail, Greg and Terry get the Smith's marriage license.

Stan and Francine have a minor disagreement when they both choose white for the new color but pick different shades but things start to fall about when Francine wants a modern kitchen while Stan wants a traditional one. With Greg and Terry present, Stan overrides Francine with the contractor, insisting on his kitchen choice. Francine retaliates by asking the contractor to put a bay window in the kitchen. When Stan finds out, they start to bicker but when they notice Greg and Terry watching pretend that everything is still fine.

As the remodel spreads through the house, Stan and Francine's marital harmony breaks down until they finally divide the house in two, each decorating in their chosen style. Not satisfied, they each attempt to drive the other out of the house until they erect a block wall between the two halves of the house, inside and out. As the rest of the family spends one holiday after another with first Francine then Stan, leaving the other alone and miserable. After several days of being alone, they hear each other across the wall and can't bear to be apart any longer. They tear down the wall and agree to return the house the way it used to be. At that moment, immigration officials burst in while Roger and a blow-up doll in wedding dresses appear. Roger opens the air valve on the doll and tells her to flee. as she bows away, the agents open fire on the doll. 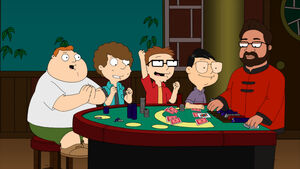 At school, when Principal Lewis knocks a box of candy out of Barry's hands, Barry is quickly able to determine what was lost. Deciding to test Barry, Principal Lewis runs through a deck of cards and Barry is successful in determining the remaining cards. Principal Lewis takes the boys out to a gambling house where he turns Barry loose at the blackjack table where he quickly wins big. But when Principal Lewis leaves them stuck in the car while he goes to a strip club, the boys decide to strike out on their own. They are successful until Principal Lewis finds them and threatens to sell them out, exposing Principal Lewis who owes the casino money, he blurts that the kids were counting cards and the casino owner orders that they all be shot. Fleeing the casino's goons, they hide behind a trash can until the goons empty their weapons. When Barry claims they are out of ammunition, Principal Lewis bursts out and is shot in the shoulder. When Lewis asks why he lied about the number of shots fired, Barry points out he should never touch a fat boy's candy while sticking his finger in the bullet wound and twisting it.