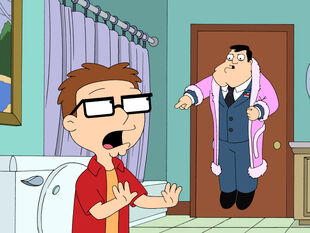 Stan confronts Steve about the drone

Roger's Disguise: Mexican disguise from "The One That Got Away" 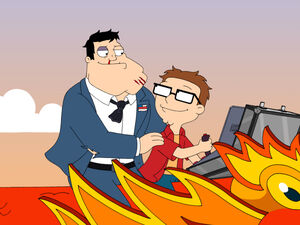 Steve is left home alone when the family takes a trip to look at a potential college for Hayley. When his friends arrive and realize he has the run of the house, they persuade Steve to break the rules. They’re soon in over their heads when they discover that what they thought was a video game is actually a military controlled drone. Due to Steve's meddling, the plane is delayed. Stan decides to leave to get a newspaper believing he can return. The boys quickly find out they have a real military drone but need to have it repaired when it is damaged and send it to someone Snot recommends. Stan is denied permission to reboard the plane and heads for home and discovers the drone is missing. Stan and Steve return to the bodyshop to find out the mechanic lost the drone to the Chinese Mafia as part of a gambling debt. Stan fights off the Chinese Mafia during the new Years Day parade and is rescued by Steve who pilots Stan and the drone to safety. 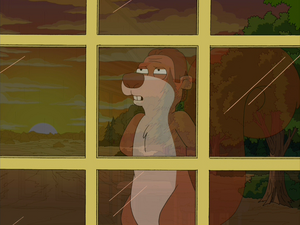 Roger, disguised as little Caitlin decides he needs a drink but can't due to his underage persona so he changes to Stan. The air marshal on the flight discovers Caitlin/Roger missing and Roger/Stan exasperates the situation. When the air marshal freaks out, Roger returns as Caitlin.

When the boys discover they have taken control of a military drone, the crash landing that damages it kills the President of the local squirrels. When his aides inform the Vice-President that he is now in charge, he tells them that there will be changes. As more aides and the military leaders press him for more plans, he announces that his first goal is to discover what is in a nearby bird feeder.

Retrieved from "https://americandad.fandom.com/wiki/Home_Adrone?oldid=79335"
Community content is available under CC-BY-SA unless otherwise noted.