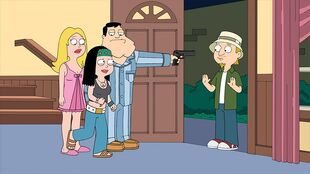 Holy Shit, Jeff's Back!
Jeff returns from space...Or does he?

Roger's Disguise: Sholanda Dykes, AT&T operator from "The One That Got Away" 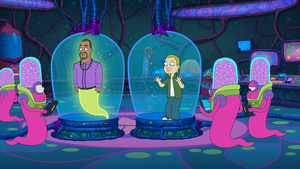 As Bullock watches a couple making out and other people go about their lives, a meteor flies toward Langley Falls, becoming a spaceship that smashes into a car. Stan answers his doorbell to find Jeff has returned. He is greeted by the family and gets a warm welcome from Hayley, as Stan threatens to kill him. Jeff notes that space has changed him so he can keep his mouth closed. A gift clock that he brings discourages Stan from killing him. But as Roger remembers being responsible for sending him off into space, he decides to make himself scarce.

As Hayley proposes getting high and having sex, Jeff claims he doesn't smoke anymore and insists he's changed his ways. Even his favorite bands no longer interest him and he espouses his admiration for Stan as Roger tries to take credit. Jeff steps away and Hayley admits she is suspicious about him. Jeff reveals that he is really an alien out for conquest and his first goal is to capture Stan as the alpha-male, being the complete opposite of Jeff.

He sends back earth samples, including Snot's hamster which the aliens find cute. As Stan eagerly looks forward to their time out for froyo, Hayley continues to express her doubts and Roger admits that he knows that Jeff is fake, surprised that the rest of the family was unaware. As Stan and Jeff hang out, Stan takes Jeff out shooting and he continues to drop inadvertent clues that he is an alien until they get invited by Stan's CIA buddies for more froyo. Roger finds the alien's transportation device and claims they like to collect species from other worlds. Roger tries to shove Hayley into the machine as she insists that he comes with her. As the CIA gathers for froyo, his behavior rouses their suspicions as well but he manages to laugh it off. As Hayley and Roger arrive on the alien ship, they search until they come across Sinbad in a glass tube and he points out Jeff in pieces as Roger adds that they dissect instead of collect. As they are found by the aliens, Roger tries to sacrifice Hayley in his escape but knocks himself out. 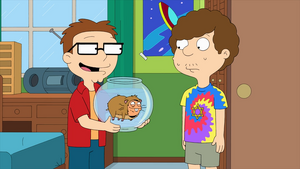 Steve searches in vain for Snot's hamster as Klaus tries to encourage him to look after his own pet, namely himself. Stan and Jeff return and Jeff takes him to his old room and tells him the truth about his mission and his duty. However, he no longer feels like he can go through with it and claims that they killed Jeff in their dissection and Hayley is due to be next. They board the ship to stop the dissection, bringing froyo as proof of humanity's value, getting Hayley free but she mourns for Jeff as the alien offers to replace him at the cost of his own life by transplanting Jeff's brain into his body so that Jeff may live again. Back home, Snot returns for his hamster as Klaus poses as a stand-in. As Stan mourns for the fake Jeff, Roger points out that they will lose their memories that Jeff is not entirely original. As Jeff awakes, he is back to normal, which Stan takes without joy.