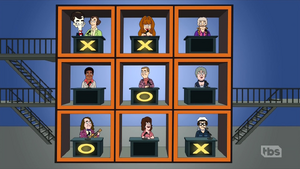 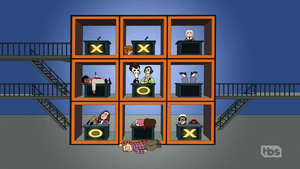 Hollywood Squares an American television comedy and game show in which two contestants play tic-tac-toe to win money and prizes. The "board" for the game is actually a 3×3 vertical stack of open-faced cubes, each occupied by an entertainer seated at a desk and facing the contestants. The stars are asked questions and the contestants judge the veracity of their answers in order to win the game.

When Steve tries to come up with an idea for a school talent show act in "The Talented Mr. Dingleberry" after his singing is sabotaged, Roger pitches becoming his ventriloquist dummy. He shows off a scrapbook of his former act which includes several game show appearances. Later, when Roger turns more psychotic than usual, Steve discovers that the scrapbook also contains clippings from where his former partner Dennis was blamed for a series of murders and sent away to the Danvers Asylum for the Criminally Insane. There, he finds Dennis who reassures him that it was indeed Roger who committed the murders, killing the entire cast of Hollywood Squares in order to become the center square.

Retrieved from "https://americandad.fandom.com/wiki/Hollywood_Squares?oldid=74466"
Community content is available under CC-BY-SA unless otherwise noted.