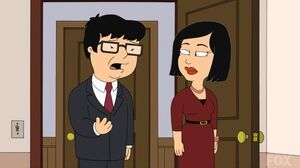 Hideki Yoshida is the father of Toshi and Akiko and husband of Hiko Yoshida.

Stan claims to have cleared Toshi's conversion to be a cowboy with his parents in "The Magnificent Steven", but admits he didn't understand them.

In "May the Best Stan Win", the boys find his sex doll which he allows them to take to remake the movie Mannequin.

Roger and Stan take their idea for "Male Stripper Shoes" to Mr. Yoshida to get funding for their idea in "National Treasure 4: Baby Franny: She's Doing Well: The Hole Story". He agrees to bankroll their idea on the condition that they kill his wife but they find they are unable to do it. They later spot an ad for their shoes and find he has stolen their idea.

Mr. & Mrs. Yoshida appear during "He's Got a Kink" in "The Missing Kink" as participants in S&M.

Hideki becomes a "business partner" when Stan and Roger decide to market their "Piece of Cake" cake slicer in "Independent Movie" during his birthday party when he demonstrates his "gut instinct." However, as they celebrate their success, the trio's gut instinct results in the three of them pulling guns on each other as the screen goes black. As a shot is heard, Roger proclaims that Hideki was the one shot.

He is one of the savage survivors in "The Two Hundred" and can be seen in the audience of the talent show with Akiko and an unidentified Asian youth in "The Talented Mr. Dingleberry".

He can be seen at Steve's play in "Tapped Out" and appears during "Everyone is Happy in Utopia" in "300".